Toronto, ON – December 17, 2019 – After almost six months of growing panic concerning the cause of the lung illness, or EVALI, that swept the U.S. and parts of Canada, The Centers for Disease Control and Prevention (CDC) confirmed on December 6 that nicotine-based “e-cigarettes” have not been linked to a single vaping-related illness. In fact, as has been widely suggested by a diversity of clinical experts, the true source of this illness is illicit cannabis (THC) vaping products containing vitamin E acetate.

The Canadian Vaping Association (CVA) has steadfastly maintained over the course of this outbreak that all of these lung illnesses are related to illicit cannabis vaping products containing vitamin E acetate and not e-liquid nicotine bought in age-restricted vaping shops. Yet, until this final confirmation from the CDC, public health advocates and the media have seldom given this hypothesis (and subsequent clinical findings) much credit or consideration, instead irresponsibly grouping all vaping products — be they black market, THC, THC with vitamin E acetate or regulated e-nicotine — under the single classification of “vaping and e-cigarettes.”

“This update frankly comes too late in the cycle of this tragic EVALI episode, both for the victims and the untold number of reforming smokers who found salvation through e-nicotine vaping, only to be compelled back to combustible tobacco out of false fears. It does feel like we are finally vindicated, now that it is widely and conclusively established that these lung illnesses were the result of black market cannabis vaping products laced with vitamin E acetate. For the past few months, it has felt like our statements about what was – and wasn’t – at the root of the outbreak fell mostly on deaf ears,” said Darryl Tempest, Executive Director of the Canadian Vaping Association. “This announcement from the CDC further demonstrates the critical importance in classifying the e-cigarette category accurately and specifically to clearly differentiate nicotine, water-soluble vaping products from oil-soluble cannabis vaping products containing THC.”

The CDC’s announcement identified over 150 THC-containing vape products attributed with the lung illness, but not a single nicotine-based vaping product was included in this list. This can be directly attributed to the regulations within the nicotine-based vaping industry that ensures products sold in legal vape shops are exposed to the most stringent regulations to ensure safe, quality ingredients.

This distinction between vaping products should also have been made crystal clear in the early days of the mysterious outbreak to avoid an escalation, according to public health experts like Dr. Michael Siegel of Boston University. Dr. Siegel has been very critical of the agency’s mishandling of the associated messaging campaign, calling its public warnings to avoid all vapour products “intentionally vague.” Dr. Siegel has stated previously that the Centers for Disease Control’s anti-vaping prejudice—and a growing bias against the use of e-cigarettes for smoking cessation—is putting public health at risk.

“Our industry, which is not affiliated with tobacco-owned vaping brands, has greatly suffered from this misclassification and the wrongful association of our industry with illicit THC-based vaping products,” said Tempest. “Now that the reality of the source of the outbreak has been confirmed, we are focused on educating Canadians on the truth of these products and their components. Nicotine-based vapes remain a far less harmful alternative for tobacco smokers and Canadians need to know that products sold in legal vape shops have gone through a regulated process that ensures safety and adherence to ingredient labelling requirements.”

About the Canadian Vaping Association
The Canadian Vaping Association (thecva.org) is a registered national, not-for-profit organization, established as the voice for the burgeoning Canadian vaping industry. Founded in 2014, the CVA represents over 300 retail and online vaping businesses in Canada, not including tobacco companies or affiliates. The association is the primary liaison with the federal and provincial governments on all legislative and regulatory issues related to the industry. The primary goal of CVA is to ensure that government regulation is reasonable and practical, through the strategy of professional proactive communication and education supplied bilingually to health officers, media, and elected officials. 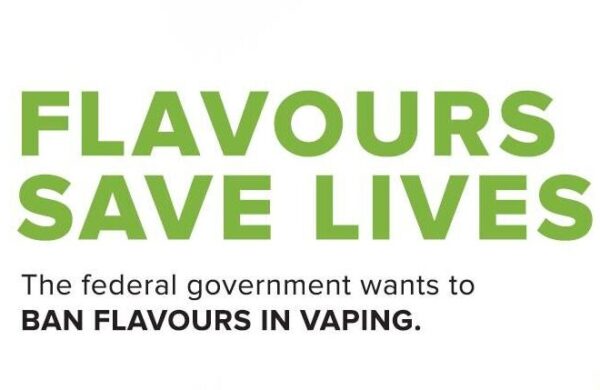